Having really enjoyed the National Road Relays last weekend, I was particularly looking forward to stepping up to the longer distance of the Tom Scott Memorial 10 Miler. Last year this was my favourite race of the season (outside of the London Marathon) and I was keen to have another crack at it. It was also exciting to know that we were heading to the race with yet another phenomenal turnout from the Harriers which meant I could be sure of an epic support team along the route! Whilst a little chilly initially, the weather would be ideal for racing and, once the warm-up was done and dusted, it was time to shed the final layers, lace up the racers and make my way to the start line. 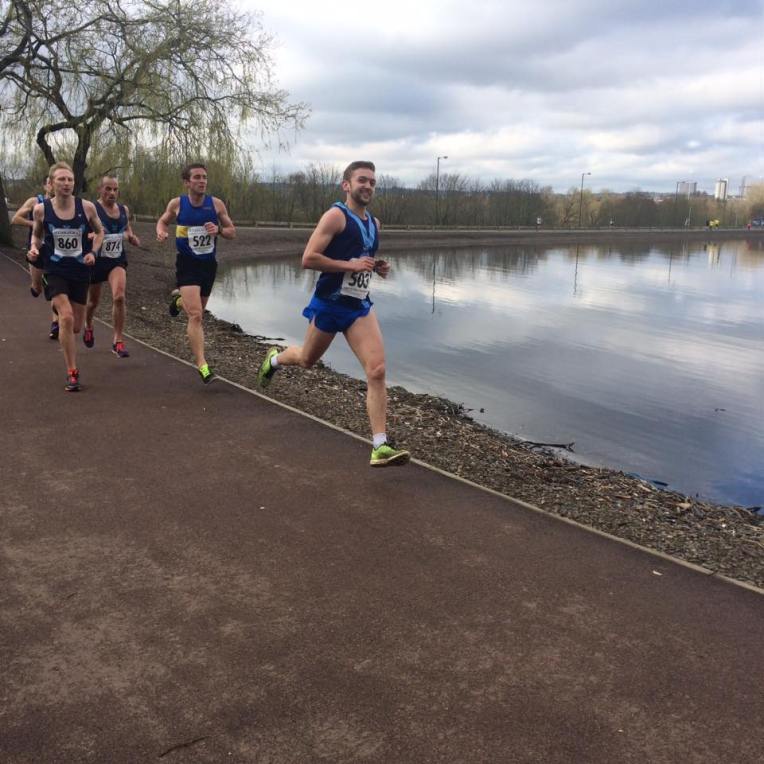 Toeing the line reminded me of just how many fantastic runners were competing in this event – being the National Championships, I probably should have been aware of this already but it had somehow slipped my mind! The familiar nerves made an appearance at this point and thoughts remained fixed on keeping my footing as the crowded start would make the first few strides a little tricky. Nevertheless we got away with no difficulties and it was not long before I found myself tucked into the middle of a pack of Harriers. There are few feelings quite as satisfying as running at speed in a pack with your mates and feeling strong. As the group moved up the field it became clear that there would be four of us working together over the flat and fast course. Colin took the lead within the group and set a brisk pace which I knew would lead me to a good time and possibly a shiny new PB. A glance to my left and my right revealed Cris and Gregor also ticking over at a strong pace and this only added to the positive feeling as we made our way through the early miles.

As we completed the first loop of the Loch I felt great. The group were still running well and we had managed to move up the field with some success. The Bella cheer squad were once again out in force and gave us a massive boost as we entered the second half of the race. It was at about the seven mile mark that thoughts of the finish started to creep in. I had been feeling very strong so far although I definitely noticed the increase in pace. Colin led the group on and the pace continued to build. It was at about the eighth mile that we started to spread out a little and I began to worry that I would not be able to hold on – the pace was increasing steadily and doubt was creeping in. The knowledge that the remainder of the course was pancake flat, and that there were two rapid Harriers chasing me down, just about kept me going as the finish line approached. It was surprising to find a second wind for the final few hundred metres and  I managed to put in a final burst to cross the line in 54:26 – A big new pb!

Having shaved thirty seconds from my previous best, I was over the moon with the performance. It was an added bonus then when I was told that we were in with a chance of a National Medal. The results were announced and we had taken the silver! Awesome! Not only that, but the Bella women’s team had also taken the bronze medal and Fraser and Erica had both claimed individual victories for their own age categories. All in all it was a great day for the club – last year we had one runner in the top 20 finishers in the men’s race, this year we had four. Things are moving in the right direction! I made my way home happy with my medal and got fired into an amazing curry and a beer to celebrate. A great end to a great day!