Last week I fell victim to Kenny’s latest scheme – taking on a hill run! I have always been intrigued by the concept of hill running and have often thought that I would actually quite like to give one a go. I do enjoy getting off road and exploring when out for a run so I figured that powering up and down a hill could be fun! When it transpired therefore that Kenny, Iain and Paul – all fellow Harriers – would be heading out to Tinto for a 4.5 mile challenge, I found myself signing up.

After a journey filled with whispers of the difficulty that would face us, we arrived at the base of the hill. And what a hill it was! Tinto towered over us as we collected our numbers and prepared for the race.

With the Renfrewshire X-Country Championships coming up the following week, I had been advised to watch my footing during this event – the loose, rocky surface and rapid descent could potentially be hazardous. With this in mind, I decided to use the run more as a training exercise than a flat out race and I am definitely glad that I made that decision!

Standing at the base of the hill, I tucked myself into the middle of the pack and, on the gun, began my ascent. I made a conservative start, aware of the long climb ahead, and found myself slowly moving up the field. At about two-thirds of the way up I started to really feel the burn in my quads and, as the runners around me slowed to a walk, I joined them and found myself striding up the hill for much of the final section.

Circling the cairn at the top of the hill, I decided to try and stretch the legs out on the way down in order to make up a few places. I took a dozen speedy strides down the hill before I realised that I had absolutely no control over my pace! Panic set in and I reminded myself of the other races on the horizon. I settled into a pace which I found fast enough but at which I still felt I was in control of my legs (just about!) and less likely to do myself some damage.

At about half way down the hill, the path became a little more clear and I was able to push the pace on a bit and finish the race with a sprint. On the descent I had been overtaken once and had managed to overtake one person myself, leaving me sitting in 18th position. The other Harriers had put in some decent performances also with Iain finishing 69th, Kenny 90th and Paul in 95th despite a fall on the way down. 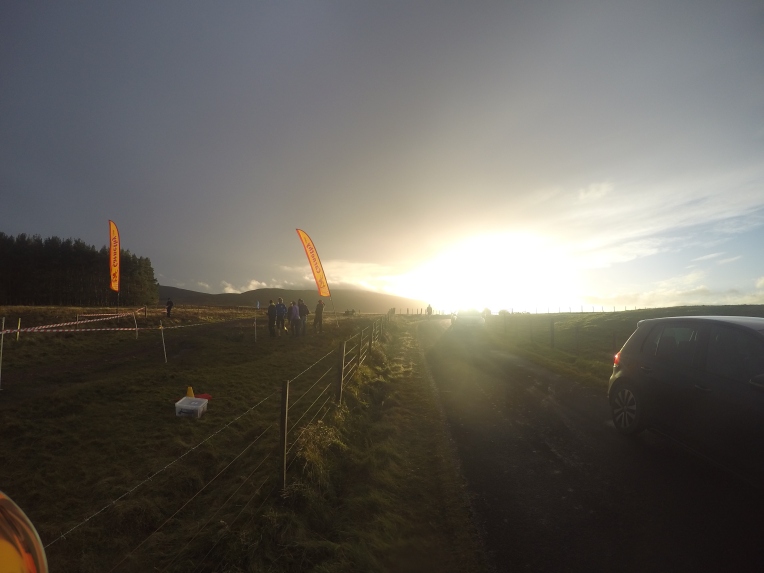 Sitting in the cafe afterwards with a pot of tea and a huge scone, we reflected on the afternoon’s race. I had enjoyed the experience but I felt a little lackluster about the race itself. The event was very well organised, great value and had a brilliant atmosphere but I did not feel challenged in the same way that I do when racing on the roads. I felt that my commitment to a number of other races meant I was unable to really commit to the downhill section and therefore did not feel that I had pushed my body physically. I believe that, were I a committed hill runner, and that this had been my target race of the season, I would have got more out of it but it felt like I had too much to lose by really pushing it.

I’m sure loads of people will disagree with me but I came away thinking road running is more of a challenge. When you have no ‘obstacle’ to overcome, the ‘race’ becomes more pure – there is nothing to hide behind other than your own fitness. Over a 10km flat road race, for example,  I can push my body to its absolute limit. In future I will continue to run on hills but I think I will only use them as training runs – they don’t mean enough to me to risk injuring myself and ruining my season. This was a fun day out, and a good experience, but I haven’t been converted to hill running just yet!