Finally made it down to the Great Run Local event this evening after having my wrist band for about 3 years. A couple of factors swayed me this week – dinner at the mother-in-laws was cancelled and Richard Cooper was on course to meet his target of 1000km of race miles for the year. A great achievement that I’ve been following throughout the year as out paths have crossed at various runs.

If you don’t know the Great Run Local is a series of weekly events in a number of UK towns and cities. Glasgow’s event is held on a Wednesday night making it an excellent complimentary run to the more widely heard of parkrun series. Simply register online and take your wrist band down to the Broomielaw at 6-30pm. Much smaller than the parkrun events it nevertheless appears to embody much of the ethos that makes parkrun so popular – open to all, volunteer led and incredibly welcoming to me as a first timer.

Jogging over from Shawlands I mulled over race strategy and settled on a sub 20 target to see if I was in race shape. I felt strong at the recent cross country and wanted to see if I was running at a similar level to the start of the year when I clocked sub 20 on a reasonably consistent basis. I’ve not done many 5 or 10ks recently so it could all have gone terribly wrong.

Setting off I tucked in behind 3 runners as we crossed the river and rounded a few sharp turns. Should have been obvious but it was around this time it clicked that the route is pancake flat. It was reasonably quiet in terms of pedestrians and cyclists tonight and that combined with near perfect running weather meant the first mile (including 2 crossings of the Squiggly Bridge) passed in a decent 6-15. Feeling strong as I rounded the furthest point of the course I used the next few turns to push hard and keep up with the lead runner in the pack. Forgetting about my watch I stayed here until the final turn pushing for home with about 1km to go.

Having missed my regular training a lot recently due to a deadly combination of man flu and parents nights aiming for a sub 20 was perhaps a tad ambitious but the support of the pack definitely helped pulling me around making the ordeal seem a whole lot less of an effort. I was even able to pick up the pace in the last 400 metres. Crossing the finish line I was pleasantly surprised to have dipped under 19 minutes (only my second time). Even more so as I felt comfortable throughout. 19-02 on the official results but my watch had me at 18-58. With a few seconds grace waiting for your band to be scanned at the end of the race I’m definitely counting this one as a sub 19.

This was a good event;  a fast course, a lot of familiar faces and the chance to run by many of Glasgow’s most iconic landmarks. I’ll definitely be back and I’d encourage others to give it a go.

Final shout out to Richard. His achievement and support for an amazing cause over such a long time is a real test of commitment, dedication and luck on the injury front. He’s averaged two races a week for a year including a few ultras along the way. If you could spare some change I’m sure he would appreciate the support via the links below.

Thanks as always to the marshals. Stats below for the number crunchers 🙂 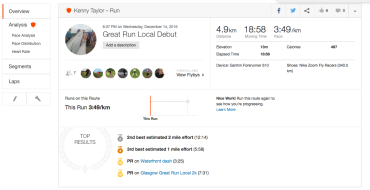