On Saturday the 21st of October I anxiously headed to Dunoon to compete in the first ever Cowal Way Chase Ultra event – a combined ultra run with relay option and cycle between Glenbranter and Portavadie in the heart of Argyll. This was my first official tilt at an organised ultra (the less said about CLYDE AND SEEK the better) and I was looking forward to a relatively low key introduction to ultra running on home turf.

With a dearth of long runs in the bank post London (all the way back in April) this was always going to be a slog but with so many fellow Dunoon Hill Runners toeing the start line I was keen to support this new event. Sadly the weather had taken a real turn for the worse on the morning of the race and the stunning Argyll landscape was largely clouded from view during the run. This did little to dampen spirits as runners gathered under the gable end of the village hall in a vain attempt at seeking shelter from the elements. The rain was relentless throughout the run making conditions tough going although it did ease prior to the start of the run.

So on to the course. The route itself is predominately run on undulating (code for uphill or downhill) forestry track with sections of flat road running. The relay and solo runners set off first (under the watchful gaze of the Adventure Show’s Dougie Vipond) before the cyclists chase in hot pursuit. The difference in start time allowed most of the runners time to reach the summit of the first peak before the bikes start passing. At a little over 1,000feet in under 4 miles this is a tough start to the run as you climb up through the forest before reaching the highest point of the route. The long descent into Glendaruel gives some respite to tired legs as runners and cyclists reach the changeover point for relay runners and bag drop area. At this stage approximately 10 bikes had overtaken me, each less impressed with shouts of ‘gies a backie’.

Reaching the checkpoint around 11 miles I wasn’t hungry or thirsty but I was most definitely gubbed. The climb had taken it out of me and despite everyone’s advice I had set off way too fast. Sitting in 4th place at this stage my hopes of catching anyone ahead of me were gone. My legs felt heavy and my breathing and energy levels just weren’t right. A lack of preparation on the hills meant what was to follow was unfortunately not going to be pretty. It was more about a finish now than a time or position.

Not feeling hungry at this point the checkpoint was perhaps several miles too early in the route to benefit me properly.

Heading out of Glendaruel the route passes along two or three miles of road which should have been heaven to me but I felt like I was running in hot tar. As I reached the start of the second climb I was glad of the excuse to power walk the next 5-6 miles which mainly involved a lot of climbing and trying to stay warm and as dry as possible. Around this time I was feeling pretty sorry for myself, isolated and tired on a bleak day. Looking back I wish I had waited for some company and spent some time moving forward with someone else. This is one of the key aspects about the ultra running community that I really envy and with a relatively small field it was just not possible at this stage of the run.

From the top of the second peak I adopted a jog-walk strategy with anything remotely looking like a climb fair game for a walk.

My watch died shortly after the 35km mark which at the time felt like a disaster. As I hadn’t looked it for a while I had literally no idea how much further I had to go which was hard to take. The mental endurance required to complete an ultra (alongside a marathon) is definitely as important as your physical endurance. It was now just a case of one foot in front of the other as I carried along the well marked route towards the promised post-race refreshments.

As it turns out the end actually came a lot quicker than I though as Portavadie suddenly appeared in view as I dropped below the cloud level at the end of the second big descent. The expected onslaught of runners overtaking me had not arrived as I’d apparently built a decent enough lead in the first half to cling on to 5th place. 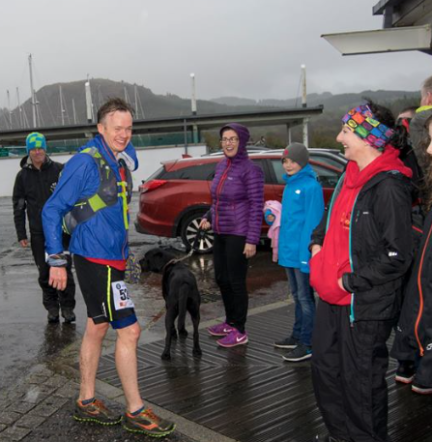 So after my first crack at a near 50k course will I be rushing back any time soon?

First let’s start with the positives:

All in I need to carefully consider whether ultra running is for me. I definitely get the appeal, the camaraderie, the wild places, the personal battle but my running has been going so well in the middle distances and on the road that it was tough to take such a battering during a pretty much universally successful season. Sharing the day though with my fellow Dunoon Hill Runners was amazing and there were some awesome performances through the field from super-fast times to longest distance run in both the solo and relay runs.

Thanks as always to the marshals who supported brilliantly in tough conditions, some in more than one location along the route and a huge well done to everyone who took part.  This event is another option on a burgeoning sporting calendar in Argyll and one cyclists and runners would do well to consider for next year. With a top feed and amazing facilities at the finish line I’d be tempted to return…maybe just as a relay runner next time around.

A special mention to Charlie Collins who put in such a huge amount of work to get the event off the ground.