Thus is a bit of a belated report on a brilliant morning on one of those rare days when the sun splits the sky in the south side of Glasgow. Moira’s Run was the runbetweener run of choice for October and it proved to be a the perfect fit on a brilliant morning. Hectic, but (fun)run-filled, the morning took precise military planning as many of us managed to volunteer at junior parkrun’s first birthday event before making the mad dash towards Queens Park for the start of the 5k run at 10-30am.

This was my second year at Moira’s run and despite cutting it fine to meet the rest of the team I could immediately sense the same special atmosphere in the park that I’ve rarely experienced on race day. There’s an absence of ego, competition and nerves at Moira’s Run. Hard to put in to words it’s much more than another 5k. It was great therefore to bring such a large group to experience and support such a worthy cause.

All the talk pre-run was about the hills; how steep, how many and how tough that steep downhill would be on the joints! To be fair The Boy and I had told people the route was undulating but we had kept a lid on how hard a run this is in order to get along a big crowd of folk. Thankfully The Runbetweeners as well as being running daft are also a generous lot and they were more than happy to support The Moira Fund in their annual fundraiser.

On to the run itself – a two lap course starting near the Glasshouse the route follows the perimeter path around Queens Park heading towards Shawlands before striking towards the Goals football complex. This section has a short climb, long steep descent and decent stretch of flat to get the legs going. Runners then head around the Queens Park duck pond before making their way towards the first of two significant climbs. This one sees the route work up the path towards the flag pole as you approach the 1.5k mark. This is a tough old slog but thankfully the route veers sharply to the left at the half way point and levels off passing above the refurbished bandstand.

A floral tribute on a bench reminds runners of the special nature of this run and you can sense the warmth and goodwill throughout the park.

The route makes for the tennis courts before another sharp uphill section back towards the start/finish line for lap 2. Eeking out a smile for the assembled throng runners then make off to complete the second lap.
Finishing the route and receiving my medal from Moira’s Mum I was compelled to run back to support the other runbetweeners and participants out on route – it’s just that sort of run.

It’s really hard to convey what makes Moira’s Run so special but it just seems to bring the best out of people and really represents everything that is great about living in Glasgow. An event that could be a solemn and sombre occasion is so happy and upbeat. What a great testament to the organisers and legacy to Moira. 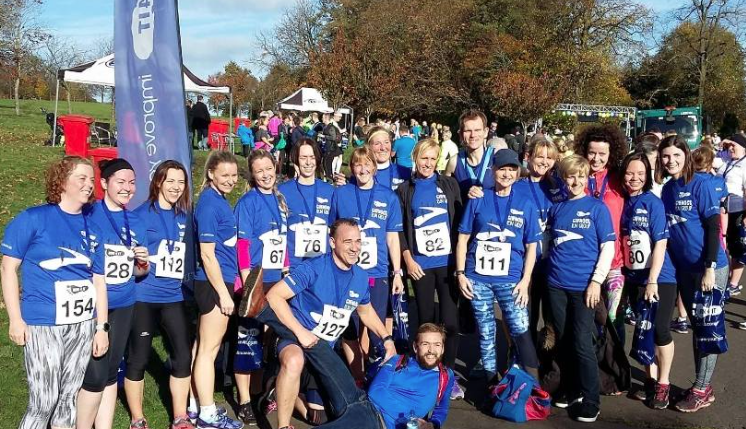 Retiring to runbetweeners HQ for the morning to refuel post race we were treated to a feast by Mary which rounded off a great morning. 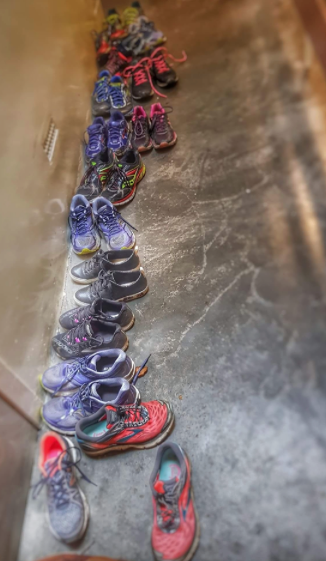 If anyone would like to donate to Moira’s Run which supports families who have experienced bereavement following the murder or manslaughter of a loved one you can find details on their website at http://www.themoirafund.org.uk

Alternatively why not enter Moira’s Run 2018, raise some money and take part in what must be the friendliest, most rewarding and uplifting event on Glasgow’s running calendar. We will definitely be back in numbers next year…. and hopefully someone can iron out those hills.