Just in from a great night – perfect mix of a cracking run, good company with lots of familiar faces topped off by burgers and beer at the finish line. Delighted with a 25 second pb given that I was planning to run easy. Updated 10k pb of 39:30.

Even more delighted to see a good few runbetweeners there and rumours of pbs tbc. Anne for definite – think that’s two weekends on the bounce. Gillian?

Onwards to the mens 10k and pacing duties this Sunday.

With the promise of a cold bottle of beer and a burger fresh from the barbecue included in the entry fee, this race was always going to attract a crowd. 500 people made their way to Pollok Park last night for the Brian Goodwin 10k – hosted by my own club the mighty ‘Bellahouston Harriers’. As I arrived at the clubhouse to pick up my number it was clear that the weather would be reasonable enough for the race and the crowds were certainly picking up. As is to be expected there was a nervous energy filling the air in the registration area as bags were dropped off and numbers were pinned ceremoniously to vests. I managed to catch up with a few teammates as we hovered about the start area and we could not help but be impressed by the excellent turnout – with many of the local clubs being represented! Motherwell AC had put in a particularly impressive entry with a bus load of their athletes turning up to flood the field. Strong representation from Shettleston, Garscube Harriers, and Ronhill Cambuslang further meant that our Bella hopefuls would be in for a tough race in the team competition.

I was feeling fairly tired prior to the start but I put this down to the fact that this was in fact a Friday evening after a long week of work and accepted that these feelings would not mean that I would not perform – I had secured my 10k pb a few weeks ago during an evening race and had experienced similar feelings at that time. In order to wake myself up I strode out for a decent warm up with my teammate Cris Walsh. Having knocked out a fairly brisk 15 minute jog along the first section of the route I was definitely feeling warm and was raring to go. I ditched the tracksuit and made my way to the start. The atmosphere at the start was fantastic and some great banter between some of the Bella lads meant that we were all raring to go. There is some phenomenal competition for places between a group of the boys at the moment which is forcing everyone to improve and which has added a real sense of excitement to the races in recent weeks. 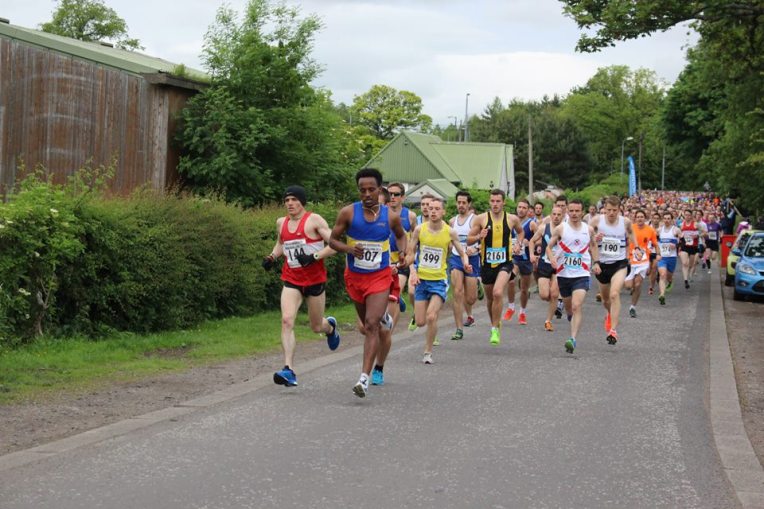 As the starting claxon sounded the crowds surged forwards for our first loop of the park. The downhill start ensured a fast first mile and before I knew it I found myself racing along in the second group. I soon realised that the pace was a little spicy for me and so I made the difficult decision to let the group get away from me and I dropped my pace to something I felt would be more manageable. Before long I was joined by a couple of runners from the third group and we made our way silently around the remainder of the loop.

As we passed the startline to begin our second lap I was sitting pretty much where I had hoped I would be although my legs were feeling heavy. I would have to replicate my first lap time if I was to achieve my target of a sub 33min 10k. Shortly into the lap I realised it was not going to happen as my pace began to drop and there was nothing I could do to pick it up again. Half way through the lap I was passed by Nick Milovsorov from Metro Aberdeen as he came flying past, leaving me in his dust. I determined to not let anyone else pass me and so pushed on into the final couple of kilometres.

As I hit the final straight I put in one last burst to try and catch the Metro runner however I just came up short and we ended up crossing the line with the same official gun time (although I am sure he was a fraction of a second ahead of me). I had finished the race in 33:47 which was a little disappointing however this was soon washed away with the complimentary bottle of Budweiser and a satisfying cheeseburger. My disappointment was then further eradicated when I realised I would be picking up the ‘Brian Goodwin Trophy’ for first Bellahouston Harrier. Our efforts had also earned us second place in the team competition.

The evening went from good to great when it became apparent that the Harriers had picked up several prizes and many of the runners made a night of it and reflected on the evening’s success over a couple of beers. This was a phenomenal event and one that I will definitely be penciling in again for next year – after all, I now have a trophy to defend!