I go through a lot of running kit. In fact, I own far more technical clothing than I do actual clothes. My wardrobe is a brightly coloured collection of fast-wicking, anti-chafing, hi-vis outfits which is constantly growing. At our weekly ‘Runbetweeners’ running group, Kenny and I are often asked for advice on kit and so we decided that each month, on payday, we would list an item which we have found useful (or just fun!) with a brief description of why it is a valued part of our running arsenal! So here we go!

This month I have mostly been wearing…

I have owned dozens of pairs of running tights over the last decade but I can honestly say that these are the warmest that I have ever owned. They have a ‘brushed inner fabric’ and are made of a ‘heavier weight Roubaix’, according to the Ronhill website – which, to put it simply, makes them very cosy. This makes them great for slower paced, easy runs but I wouldn’t wear them for faster training sessions or races as I fear they would get a little too warm. With the majority of my running being done at an easier pace however, this makes them a fantastic addition to the wardrobe – particularly at this time of year in Scotland!

Whilst the colour options are restricted to simply ‘black’, and there is next to no reflective element to the tights, this isn’t really a concern as I tend to wear an impossible to miss Hi-Vis Jacket when out in the darker hours. The neutral colour also means that they can be paired up with almost any running top (if you’re particularly fashion conscious when pounding the pavements!).

One slight issue which I have found with my tights is that the legs are quite long and I am fairly vertically challenged. These are one of a few pairs of Ronhill tights which do not come in an XS option – which is a bit annoying. They still do the job, but I do find that they gather around the knees a little bit – which doesn’t really bother me but might be a concern for others.

All in all, these have been fantastic in the recent icy temperatures and I have definitely got my money’s worth out of them. They are undeniably placed at the pricier end of the market but I feel they have been worth the expense as they are noticeably warmer than other pairs which I own and they seem to be hard-wearing – I’ve worn them loads over the winter and they’ve been through the wash plenty of times without any sign of wear. I’d highly recommend these to anyone looking for a pair of winter running tights to get them through the cold, slower paced runs. 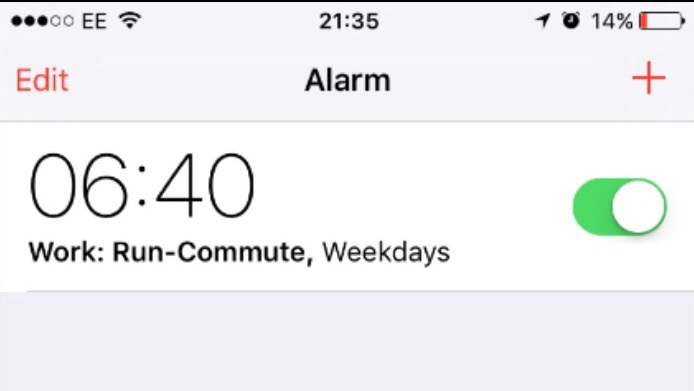 A couple of years ago I tentatively made the transition from the comfort of motorised transportation to leg power as I began to dabble with running my commute. At first the change was terrifying – I was convinced that something would go wrong – and I spent several weeks needlessly sprinting to work in order to avoid being late. After a couple of weeks of arriving at school so early that I was spending my mornings drinking far too much coffee, I began to relax and I realised that, with a little bit of thought, the run commute could well be the way forward. Two years later and I regularly run to and from work four days a week – adding 36miles to my training log – having never looked back. I often tell others of the benefits of running to work and so I thought it might be useful to pass on some of the lessons I have learned and the mistakes that I have made along the way!

I wear a suit for work and have experimented with a variety of methods of taking my clothes in and keeping them in a reasonable enough condition to wear. I have tried folding my clothes in dozens of different ways in order to carry them ‘crease-free’ in my rucksack but nothing has worked consistently. Eventually I settled with the option of reserving Mondays as ‘rest-days’.  This meant that I could take the train to work and carry a week’s supply of clothes into work with me. I am able to leave shower stuff at work also and am lucky enough to have a decent hot shower waiting for me when I arrive!

I have managed on one occasion to confuse myself over which clothes I had at work and ended up arriving at the school with no trousers to wear! I was saved from having to teach in my running lycra as (fortunately!) somebody else had left a spare suit in the changing room which I was able to borrow. The only problem was that the trousers were 8″ to big in the waist and I ended up having to belt them up around my chest and stick a jumper on to avoid suspicion… It was not successful and I spent the day looking ridiculous! I won’t make that mistake again!

I have tried a variety of bags and have settled with two that I am very happy with. Most of the time I don’t need to carry very much at all – I complete the vast majority of my marking at work and so do not need to haul a load of paperwork home with me.

I bought a cheap 8 Litre running bag from decathlon which also contains a hydration bladder (see me here!) . This is perfect for pretty much every day of the week. The bag has a secure strap across the chest which means that it is incredibly steady and comfortable. I don’t actually use the hydration bladder however it has proven to be an excellent buffer between any hard objects in the bag and my back! I tend to take my lunch in to work in a tuppaware container and have had some horrible experiences in the past with hard corners digging into my spine – the barrier created by the plastic water bladder in this bag is the perfect cushion!

My secondary bag is useful for when I need to carry slightly more in to work. I use a Puma bag which is slightly larger but boasts secure waist and chest straps to hold it nicely in place (similar bag here). The zip compartments on the waist strap are excellent for carrying my keys as I can access them quickly and easily when it is cold and raining and I don’t want to stand on the doorstep rummaging through my bag!

It became clear one day after running through howling wind and rain that neither of these bags is completely waterproof – I therefore always carry a plastic bag in the bottom which I can use as a bag liner if the weather is looking a little dodgy (which, being in Glasgow, is pretty much all year round!)

I carry my lunch in with my most days and have found that most standard tuppaware will fit in either of these rucksacks. When I first started running to work it became clear very quickly that I would need to eat before the schoolday started. I have found that I cannot eat before the run (I will occasionally knock back a quick espresso) and so I have experimented with different options for breakfast. My standard approach is now pretty dependent on the time of year: During the cold, winter weeks I take a bag of porridge oats and a big carton of milk in with me each Monday morning (nothing beats getting on from a cold, wet run and having a steaming bowl of porridge and a cup of hot coffee!), however during the warmer months (which are rare) I prefer something a little different. I will often prepare something the night before which I can carry in with me in a tub in my rucksack. A regular favourite is to half fill a tub with oats and then I add some flaxseed, frozen fruit and milk before leaving it in the fridge overnight. Sometimes I add a scoop of Whey Protein to this mix and this can really help keep me full until I get a chance of a break at 11:15.

Larger cartons of milk will generally burst if carried in a rucksack while running… take them in on a rest day!

Leave some change in a drawer at work for the times that you simply haven’t taken enough food – I burn several hundred calories on my morning commute and so am frequently still hungry even after finishing a substantial breakfast!

As I mentioned earlier, the run-commute has genuinely changed my life! The substantial increase in my weekly mileage has reaped benefits in my race times at every distance. The ability to undertake this significant increase did, however, take a bit of time and so I would strongly advise against any sudden increase which would occur were anyone to jump straight in to a daily run-commute. When  I was building up the frequency originally I found that alternating running with cycling worked as a good way of keeping the legs ticking over whilst minimising the risk of an over-training injury.

Give it a go! There are few feelings more satisfying than sitting at my desk, refreshed and with a hot cup of coffee, knowing that I have already enjoyed a steady, early-morning jog while the rest of the world are still wiping the sleep from their eyes. 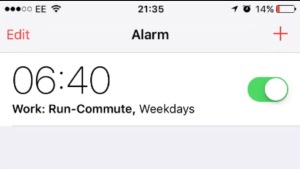